Improve your driving (and save money) with Lightfoot 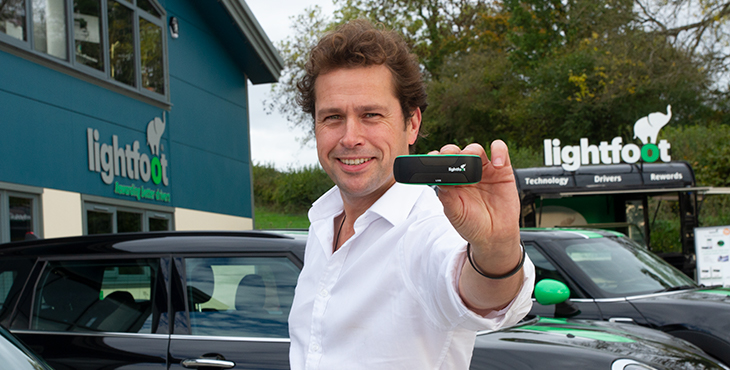 Part of the Wisdom Interview Series

Today the Claimscore team speak to Mark Roberts, founder and CEO of Lightfoot. Lightfoot is the first connected car technology to reward its community of better drivers and is on a mission to fill the UK (and the world) with safer, smoother drivers by giving better driving genuine value. A company with a strong focus on social benefit, Lightfoot is aiming to reduce our carbon emissions, save users money, and even save lives.

What’s the story behind Lightfoot? Why did you decide to set up that business?

Lightfoot and Ashwoods Electric Motors, our sister company, were born out of the Ashwoods Group. We had a big-name client who were retro-fitting our motors in a fleet of vans and expecting serious improvements to efficiency – yet they saw barely any difference in performance. We couldn’t understand it… We poked and prodded the engineering, tore everything apart and nearly went mad with the confusion, until we finally realised our product wasn’t the problem – it was the drivers.
You can design vehicles to be as clean and high-performing as possible, but if the person behind the wheel is slamming their foot to the floor and over-revving, you’re never going to get the results you expect. That’s how Lightfoot was born – we saw the need for technology that could make a lasting improvement to driver behaviour.

People see us and immediately associate us with telematics – you know, Big Brother stuff. The truth is, we are a driver rewards company. Everything we do is pro-driver, we aren’t there to spy on them or tell tales; Lightfoot is intended to coach drivers into a smoother driving style for their own benefit.
If drivers get a good score with Lightfoot, they’ve got the proof that they’re performing well and driving safely. If they slip up, Lightfoot can remind them to ease off a little and that entire interaction is kept between driver and technology. Nobody else knows about it – not their insurer, not their boss, just the driver. There are no negative consequences to having Lightfoot.

Allianz have proven that customers have reduced at-fault accident rates by as much as 40%, and associated claims costs by 60%.

How did you get started?

We developed the technology under the name of Ashwoods but soon realised the massive potential Lightfoot had as its own venture. The company was incorporated in 2013 and it wasn’t long before the first generation of our technology was being picked up by commercial fleets across the UK.

What has been the most exciting moment for the business so far?

There have been a lot of very different exciting moments for us and it feels like every year is a milestone in itself. I will say, though, that moving to our custom-built, bespoke office – Innovation Valley – this summer was a huge moment that has galvanised everyone in the business. We also just completed a £3.2m investment from BGF which is going to supercharge our growth and technology. I can’t decide between the two!

Biggest challenge you’ve had to overcome?

Establishing ourselves in a market of one and proving that we go above and beyond everything else people associate with driver behaviour.

How Lightfoot work? How does it know how you’re driving and what to say to you?

How smart is your engine? Formula 1 style driver Tech that rewards your better driving in many ways.

It’s comparable to the kind of technology they use in Formula 1, actually. Lightfoot connects to the vehicle’s engine via its OBDII port – the same way a diagnostic tool would detect engine faults and read performance data – and reads the live data as you’re driving to analyse engine stress and conditions.
If you are going down a hill and start flooring it, Lightfoot will pick up on the fact that you’re pushing the engine more than is needed and will tell you via its visual alerts. It’s a simple traffic light system. The further you stray away from your engine’s ‘sweet spot’, the more the lights will build up and go from green, to amber, to red. As soon as you ease off, the lights will drop back down into the green.
If you drive inefficiently for an extended period of time, keeping the lights red, you will eventually hear an audible ‘nudge’ that reminds you to return to a more efficient driving style as soon as possible. This feedback can be altered in terms of volume and sensitivity via the app in our consumer product, though, since not everyone needs it!
That’s the beauty of the system, though. It’s not randomly deciding what ‘good driving’ is, it’s telling you exactly what your specific car needs as you are driving it. It’s effectively giving your engine a voice, enabling it to speak up when you’re asking too much of it.

How much does it cost to add Lightfoot to your car?

Our consumer product is available online for £149, reduced from £169. We’re also in Halfords stores in the South West at the same price point, with more stores coming on board in 2019.

What’s been the feedback from motor insurance companies? Does it help lowering your premium?

It’s been incredibly well-received. We have a referral system set up for fleet clients from some of the biggest insurers and brokers on the market – companies like Allianz and AJG promote our product to their clients if they see they’re going to benefit from it.
For individual drivers, you can directly use your Lightfoot score to secure a lower premium – as much as 20% with one of our partners. We are recruiting more and more insurers to our panel and are excited for the next few years, in which we will be established as a technology that can guarantee a lower premium.

Has Lightfoot had a direct impact on reducing car accident claims or claim disputes, do you know?

Allianz have proven that customers have reduced at-fault accident rates by as much as 40%, and associated claims costs by 60%.
The impact of smoother driving is clear with numbers like that.

What’s next for the Lightfoot team?

Well, we’ve just closed on the BGF investment deal – that’s huge for us in so many ways. It gives us even more credibility, raises our profile, and unlocks a lot of doors. We’re going to be using that money to recruit highly-skilled engineers, customer support staff, and generally continue to strengthen the entire business. Our fleet and consumer propositions are both going to be enhanced massively by it and 2019 is going to be off the scale in terms of growth and development for us. So, what’s next…? Whatever we put our minds to!

People use Lightfoot for all sorts of reasons.
Some are in it to cut their fuel bills (typical savings are 10-20%), some are in it for the prizes and discounts, looking to get something back for all their driving (we’ve sent out almost 1300 prizes in the last 12 months!), and some are in it for the polar bears (emissions drop by 10-20% when you drive with Lightfoot).
Lightfoot appeals to such a wide audience, I’m not sure we have a ‘typical’ customer. The one thing they all have in common is the fact they’re all getting something back for being better drivers!

You also work with business fleets: What’s been the feedback fleet managers have shared with you from adopting Lightfoot?

“Working with Lightfoot means we can be confident our reputation on London’s roads stays strong… With Lightfoot, we can have even more confidence that our drivers are looking after themselves and everyone else on the road.” James Evans (CEO, Douglas & Gordon)
“Lightfoot is an excellent device which creates a smoother driving style and will help to keep our teams safe and ensure that our employees’ welfare comes first” – Richard Whitehurst (Group Manager, CEF)
“Lightfoot enables us to… reduce the cost of our fleets whilst also creating better and safer drivers.” Lee Daly (Group Fleet Manager, The Sovini Group)

What is it like working at Lightfoot? Do you go team Body Boarding on the Devon coast every Friday?

Not in the middle of winter, we don’t!
We’re serious about having a positive, engaging culture at Lightfoot and it’s something that everyone who visits the office picks up on. We were recently awarded the title of ‘Best Workspace’ in Exeter, which was such a proud moment for all of us. We work hard and we play hard – we have two staff socials a year and put on a good show for events like Halloween – check out this video if you want to see the effort we put in!
Innovation Valley is in the perfect location – we’re about 20 minutes from the beach and 20 minutes from the moors so, in the summer especially, lots of the team will go for an early evening barbecue or the more adventurous types might go kayaking or rock climbing. We are absolute evangelists for Devon and the work-life balance working in such an amazing area brings.

Building a new business takes hard work and commitment, but also demands to look after your own wellbeing. How do you switch off and make sure you’re not “plugged in” all the time?

My wonderful family demand as much attention as the business, so when I’m off the clock I’m completely plugged in to spending quality time with all of them. They keep me young… I think!

What are the next products you’re looking into offering (that you can tell us about – not the top-secret plans)?

Our consumer launch is in full swing and we’re going to be available in more and more Halfords stores. That arm of the business is in its infancy, so there’s a lot more to come from us in that area in particular. We’re already planning out what the next generation of Lightfoot will do and look like, but that’s under lock and key at the moment.

Finally, what’s your favourite wisdom quote? (quote and author) and why?

“You don’t learn to walk by following rules. You learn by doing, and by falling over.” – Richard Branson
He has always been a source of inspiration for me and that sums up my approach to business so well. You can’t be afraid to make mistakes or push boundaries. Forget failure and embrace fear!
That’s the second time I’ve mentioned Branson in an interview recently… I must be due an invitation onboard SpaceShipTwo soon!